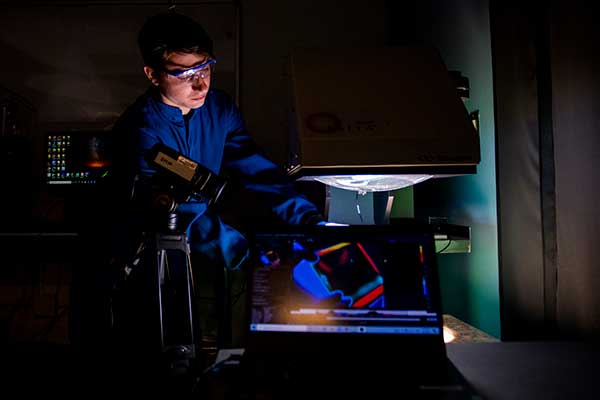 Northeastern University researchers say wrapping rooftops in a new material they are developing, called cooling paper, could reduce the need for air conditioning in buildings and lower electric bills as well as carbon emissions.

College of Engineering professor Yi Zheng and Ph.D. researcher Andrew Caratenuto say the product is capable of reducing the midday temperature of buildings by as much as 10 degrees Fahrenheit.

Together they have formed a startup called Planck Energies, of which Caratenuto is CEO, to test the material in pilot projects around Boston and to fund the manufacture of the cooling paper in industrial rolls.

“Every degree of cooling this paper provides is a degree that doesn’t have to be cooled by an air conditioner,” Zheng says.

“On a national scale, this technology could provide a carbon reduction on the order of 100 million tons just from buildings alone.”

“For a rooftop application on a typical building, we expect a drop of around 10% in your electric bill,” Caratenuto says.

“But for hotter climates and buildings with higher cooling loads, far greater savings are possible. We tend to get better performance in hotter regions. It also works well when it’s humid outside.”

The cooling paper works by reflecting incident sunlight—also known as solar energy—away from buildings and by pulling heat from buildings out through the atmosphere, Zheng and Caratenuto say.

The heat comes out through the building as infrared radiation and is taken up by the cooling paper, where it is emitted at wavelengths not absorbed by the atmosphere, Caratenuto says.

“It sounds very odd when you first hear it (described),” Caratenuto says.

But the concept is gaining traction, with a cooling super white paint being developed at Purdue University, for instance.

Zheng says Planck’s cooling paper has benefits over competitors. For starters, it is more of a fire-resistant fiber than paper, Zheng says.

Besides being fire resistant, the cooling fiber is also hydrophobic—meaning rainwater rolls off— and is thus self-cleaning, unlike paints that can get dirty and lose their reflectivity, Zheng and Caratenuto say.

“We’re targeting a lifetime of 10 to 15 years,” Caratenuto says. He says that makes the cooling fiber a smart, passive solution for parts of the world that don’t have much access to the electrical grid or traditional air conditioning.

“Populations in these areas are especially vulnerable to health risks such as heat stroke or cardiovascular issues,” he says. “With climate change, it’s only getting worse.”

In his lab in the lower level of the Mugar Life Sciences Building, Caratenuto demonstrated the performance of white cooling paper on a small, wooden structure the size of a birdhouse.

Viewed through an infrared camera, the bare roof of the little house blazed red, orange and yellow under the power of a solar simulator.

But covered by a sheet of white cooling paper, cooler blues and greens prevailed.

The next step is for engineering students to build wood shed-sized structures to further test the effectiveness of the cooling paper, which was recently described in a published paper in “Nano Energy.”

“We’d love to pilot it in a couple of areas right around here in Boston,” Caratenuto says.

Planck Energies also would like to run tests in California, Arizona and Texas to see how the technology performs “in super hot environments,” Caratenuto says.

But first the startup needs to manufacture enough of the cooling fiber—currently created in the lab in small amounts—to cover a rooftop.

“That’s what our startup is working on right now,” Caratenuto says. He says Planck Energies is contacting suppliers about producing rolls a couple hundred meters in length and a meter wide.

Zheng says the project is being assisted with a grant from the CRI Spark Fund, which helps Northeastern researchers move their product from the lab to a commercially viable prototype.

The cooling paper doesn’t have to be white, says Zheng, associate professor of mechanical and industrial engineering. He says research shows it would lose only a degree or two of cooling power if painted red or blue, for instance.

The International Energy Agency says energy costs are expected to soar in the next 30 years.

In a 2018 report, the agency says that the use of air conditioners and electric fans “accounts for nearly 20% of the total electricity used in buildings around the world today.”

Caratenuto says he doesn’t expect the cooling paper would eliminate the need for air conditioning in locations including much of the continental U.S. or Europe.

“We expect it will reduce the time it needs to be on,” he says.

“We had a good tagline the other day. We called it cost saving and earth saving.”