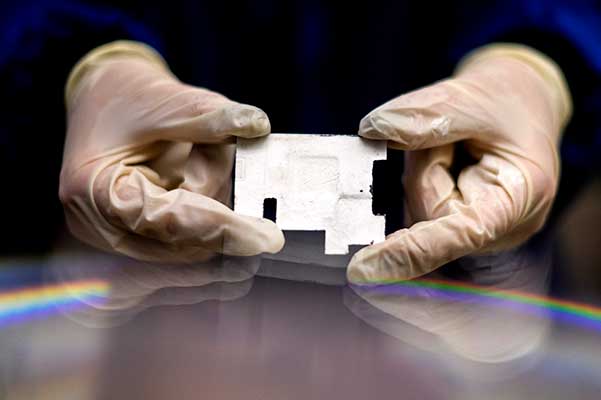 A mistake made by MIE Associate Professor Randall Erb and Jason Bice, PhD’22, in the lab, might lead to an entirely new class of ceramic materials.

Will an unexpected Northeastern lab finding lead to ‘a new frontier’ for electronics design?

Main photo: The new ceramic material can be compression-molded to fit cellphones and other heat-emitting electronics. Photo by Matthew Modoono/Northeastern University

It was one of those happy accidents of science. Northeastern professor Randall Erb and Ph.D. student Jason Bice were working on a product for a university client—and wound up with an entirely new class of material.

Their discovery of an all-ceramic that can be compression-molded into complex parts—an industry breakthrough—could transform the design and construction of heat-emitting electronics, including cellphones and other radio components.

“Our research group’s lives are very much situated at the bleeding edge of technology,” says Erb, an associate professor of mechanical and industrial engineering who heads the DAPS Lab at Northeastern. “Things break a lot, and every once in a while one of those breaks turns out to be good fortune.”

Last July, Erb was in his Northeastern lab with Bice, who has since earned a mechanical engineering Ph.D. They were testing an experimental ceramic compound as part of a hypersonic project for an industrial partner when something appeared to go wrong.

“We blasted it with a blowtorch and, while we were loading it, it unexpectedly deformed and fell out of the fixture,” Erb says. “We looked at the sample on the floor thinking that it was a failure.”

“We realized it was perfectly intact,” Erb says. “It was just shaped differently.”

Ceramics tend to fracture (or even explode) from thermal shock when subjected to extreme heat changes and mechanical loading. But their sample had deformed gracefully.

“We tried it a few more times and realized that we could control the deformation,” Erb says. “And then we started compression-molding the material and found that it was a very fast process.”

Its underlying microstructure uniquely allows the all-ceramic to quickly transmit heat and flow effectively during the molding process. The ceramic can be formed into exquisite geometries and exhibits impressive mechanical strength and thermal conductivity at room temperature, says Erb, whose findings were recently published in Advanced Materials.

Erb and Bice are developing the product via their startup, Fourier LLC—named after the French mathematician Joseph Fourier, who studied heat flow in ceramics two centuries ago. Fourier has received a $50,000 Spark Fund award from Northeastern’s Center for Research Innovation.

The new product has the potential to introduce two industry improvements, starting with its efficiency as a heat conductor that can cool high-density electronics.

In general, cellphones and other electronics are fitted with a bulky layer of aluminum, which is necessary to draw heat away from the unit.

“Our material can be less than a millimeter thick, which presents a low-profile solution,” Bice says. “It can be molded to conform to the surface that you’re trying to cool.”

The phononic crystal-based ceramic allows heat to flow without electron transport, says Erb. It doesn’t interfere with radio frequencies (RF) of cellphones and other systems.

“If you put an aluminum heatsink into an RF component, you’ve basically introduced a series of antennae to interact with the RF signal,” Erb says. “Instead, we can put our boron nitride-based material in and around an RF component and it is essentially invisible to the RF signal.”

The other improvement, says Erb, is that It can be form-fit directly to the electrical component. Echo St. Germain, a fifth-year mechanical engineering student at Northeastern who is serving as a ceramic researcher and R&D engineer at Fourier, demonstrated the ceramic’s non-Newtonian behavior by subjecting a clumpy slurry of it to vibration that is normal to the manufacturing process; it instantly liquified and organized the structure of the material. Such slurries are used to produce the moldable ceramics.

Erb and Bice believe they’ll be able to form-fit the all-ceramic materials to all kinds of electrical components. The ceramic will be thinner, lighter and more efficient than the metals currently in use.

Bice has helped launch the startup from Munich, where his wife has started a new job.

“Launching a company that is Boston-based while I’m in Germany adds some interesting complications to things—but also opportunities,” says Bice, who with Erb is engaging in customer discovery in both Europe and the U.S.